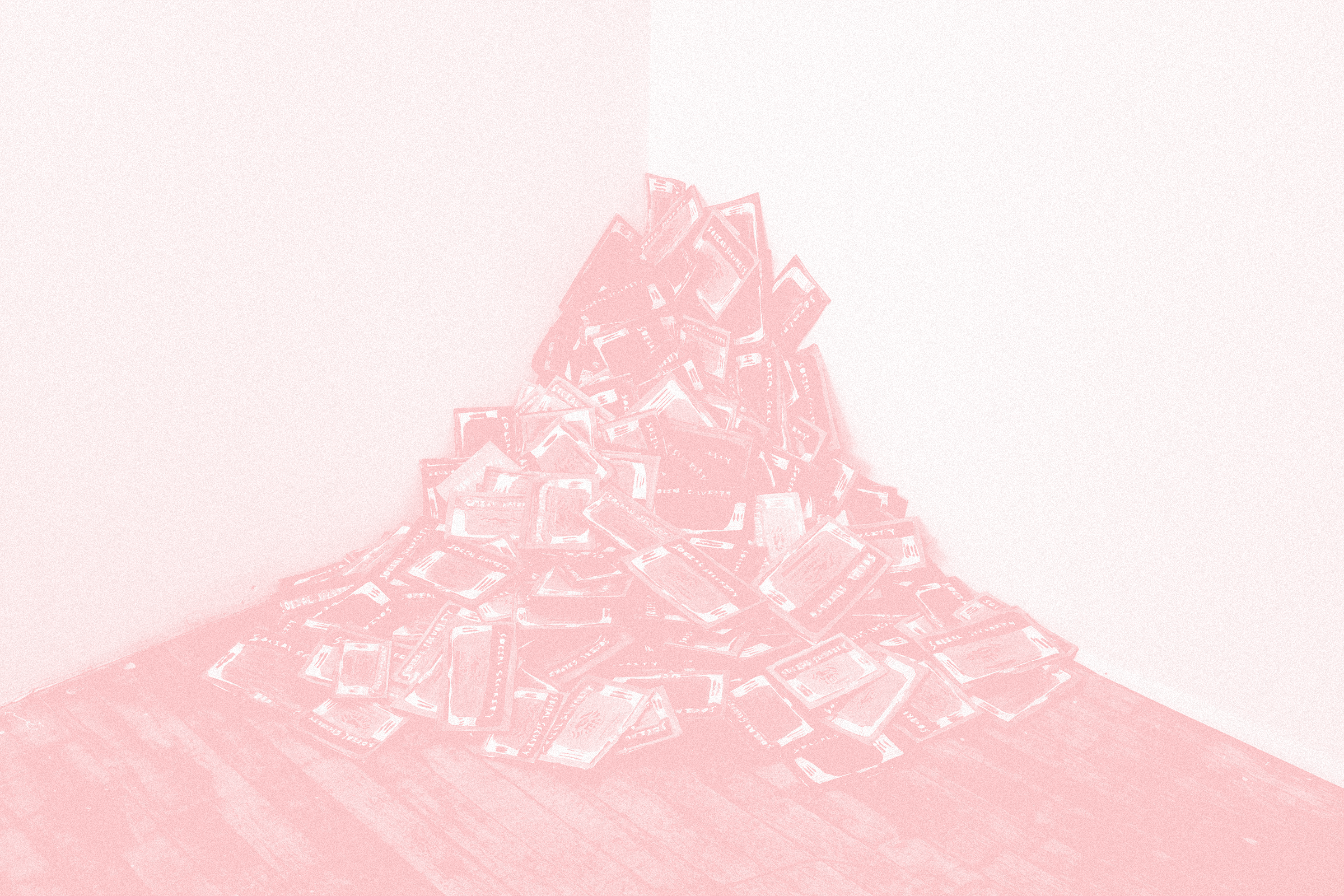 There was a summer my friend Josh and I talked about Félix González Torres a lot. And it was around the first time I had been able to see one of his pieces with the pile of candy in a corner. I started thinking about what if I had that same aesthetic urgency or that complex-yet-simple monumentality to capture this longing I feel as an immigrant? To be part of this country and understand what that means in all of its layers. I had also been making a lot of paintings on cardboard around the same time and suddenly I was asked to participate in an event where I could show some new work. I knew I wanted to paint Social Security cards because I had already done a big painting of one for my show at New Release called Still Absorbing the Good News. I really loved making that painting! It had the Corinthian columns border from the SS cards and a sanitary napkin in the center, absorbing the title. But when I shared the idea with a friend, of making copies of the cards one by one, they said, “It’s going to be a lot of work.” And suddenly, the labor became a really big part of the piece. I had previously focused on the emotional state of being an immigrant and how to share that with art, but after obtaining my Social Security card through DACA [Deferred Action for Childhood Arrivals], beginning to discern the aesthetic and the absurdity of the bureaucracy … felt important. After I started making them in person at the event I was invited to, some people called it a performance. I don’t call it a performance, but it’s definitely about the action or the motion of hand painting them, cutting the cardboard, choosing the colors … it’s like my signature on the card over and over again, yet once they are done they are someone in this country. Like how Félix’s candy was his lover.

I think that’s what made it feel so special. The real Social Security card, when I saw mine for the first time, I was kind of shocked at how it’s just a flimsy piece of paper. And here are your cards that are one of a kind and sturdy.

Yeah, like, you can’t find a more vulnerable object than the real Social Security cards! It’s just a thin, floppy piece of paper.

Your hand makes it really human, in a way that the real one isn’t in every way, especially in the sense that you chose to give me this thing.

There’s something so anticlimactic about just receiving a card in the mail, after waiting possibly decades. It definitely is a bit of a letdown when you open the envelope. But I don’t think the longing for it ever leaves you. You always want that Social Security, even if you have the card, it doesn’t mean that you get Social Security. The physical card opens up so many doors in a profound way, but you still feel vulnerable because you know that your community at large is not feeling that way. For every person who has a card, there are countless other people who are just starting to understand how much they need it. It’s also a rite of passage.

You also did a piece where you put your own card out in a gallery?

Yeah, that’s a piece called Department of Homeland Security and I made it in 2017. That was really scary, looking back on that, I’m like, what was I thinking? I guess I was passionate about breaking the mythology of that piece of paper at the time, but I can’t look at it and not remember how hard it was to obtain, thus giving me a slight pang of shame. And I got it through DACA; I haven’t gotten my full legal status yet so the fragility is very palpable for those that know my story. The whole piece, however, started with a little green bench and a decorative plate on top of it that I got at a thrift store. Shout out to the Unique on Jamaica Ave!!! The plate has some colonial boats on it, around maybe pre-Revolutionary War time. I really liked this plate; it’s like what America thinks it is but it’s not. I kept trying a couple of different things on top of them. And I just happened to have my Social Security card out, and I tried it. Just the card by itself, and once again that sort of rush of inspiration started to flow … but I didn’t have the guts to just have my number facing the world. Then, I found this state quarter from Virginia that also has boats on it, so I put it on top! Bam! Like a shiny cherry on top. It was up at SOHO20 Gallery for like a month at a show curated by Rachel Steinberg. The show had work by other immigrant artists and it was fantastic. I highly recommend you look it up. She was also very sweet.

How did she react to it?

She was born and raised in America but still understood what I was trying to say and the fragility of it. Also, that it's so heavily relying on that tension of an object on a pedestal. A “knowledgeable” viewer of art knows that you can’t touch the piece of art in a gallery, so you can’t steal my identity. But in reality, you could take it. So in this way, it is protected by the institution. It’s funny to work with that force.

That’s interesting because, typically, the institution of art operates in the opposite way; it’s at most critical, but I wouldn’t call it protective in anyway. So you are starting school soon for immigration law?

Yes, dude. I got my textbooks, they are like 10 pounds each. What did I get myself into?!

Congratulations on starting!! That’s really inspiring. What pushed you to incorporate this type of work into your practice?

It was a mixture of things. Having dealt with my own paperwork, understanding how that works and fighting against your own fear and learning institutional language that is purposefully confusing and intricate, all these things, they kind of open or close doors for a lot of people. Especially when English is already a really difficult medium for you.

The reason I found out about the [immigration law] program is because over the summer, I was volunteering with the community organization MIRA USA, and I had worked with them for a couple of different things. One of the events I helped with was through a partnership they had with the CUNY school systems and the Daily News. I had to take a very short course on how to help fill out citizenship applications. And then there’s a daylong program where people come with all their information and materials, all the things you need to start filling out your paperwork. Then you sit down and help people fill out their paperwork, especially if you speak their language. Some people [we] helped were illiterate; some people had their greencards for years but never applied for citizenship because they just didn’t see it as a need. And now that the rhetoric around immigration over the past couple of years has gotten more intense, they suddenly, after being lawful permanent residents, realized they needed their citizenship. It was really inspiring to help all these people. And then when I was walking out, I saw a flyer for the class, and I was like, this is it. At that time I was trying to figure out how I could work with immigrant communities. I was already sick of the art world and I didn’t think that making art was enough. So when that came up, it felt like the logical next step to take.

In your ideal world, what does being a citizen mean?

It’s the dignity of human beings to feed themselves, to have the same resources as others to improve our lives, based on the fact that we are human too. Is that so hard to ask? To be able to live with dignity? Most of the immigrants I know live in very hard conditions. Those are things that many American citizens experience anyway. In the end, the question of what citizenship needs to be needs to be brought to the rest of the American community too. And every anti-immigrant comment is based around demonizing people who are asking for the basics. Things that should be given to everyone in our society. We can afford to help people out of poverty, we just choose not to—or the government chooses not to at least. It keeps this very easy blame game going; it’s so much easier to blame others, people who are seeking dignity of life, rather than to acknowledge the roots of the situation.

It’s easier to blame others than to recognize your own situation and your role in creating whatever is going on.

And that’s the thing, a lot of American people are just beginning to understand the implications of their own citizenship.

What are things that you do to sustain your spirit and health, whatever health means to you? Are there practices that you keep on a regular basis?

To be completely honest, I’ve been very much seeking God. I have been able to understand that God really does exist and manifests to humankind. Having experiences with a living God, I suddenly understand that I’m not alone, and that has completely reformed everything I have ever thought before. This is something that’s hard to talk about especially around the art world because it seems like most people get really angry and think they are above having some sort of faith. But I just can’t deny that the burdens of immigration and all other pains of life are no longer hard to bear. There’s a bigger fight now and there’s a lot more strength. It keeps me focused on what my reality is—faith has become my understanding of my world. I don’t think I could have been able to deal with all that has changed these past two years. I see people at their wit’s end, just with the terrible lack of leadership that we find ourselves in on all levels of society. But now I feel a distance from that, because I don’t look to the government for leadership anymore, I’m looking somewhere else.

Is there anything else you feel is important to share right now?

I would encourage everybody to learn different languages.